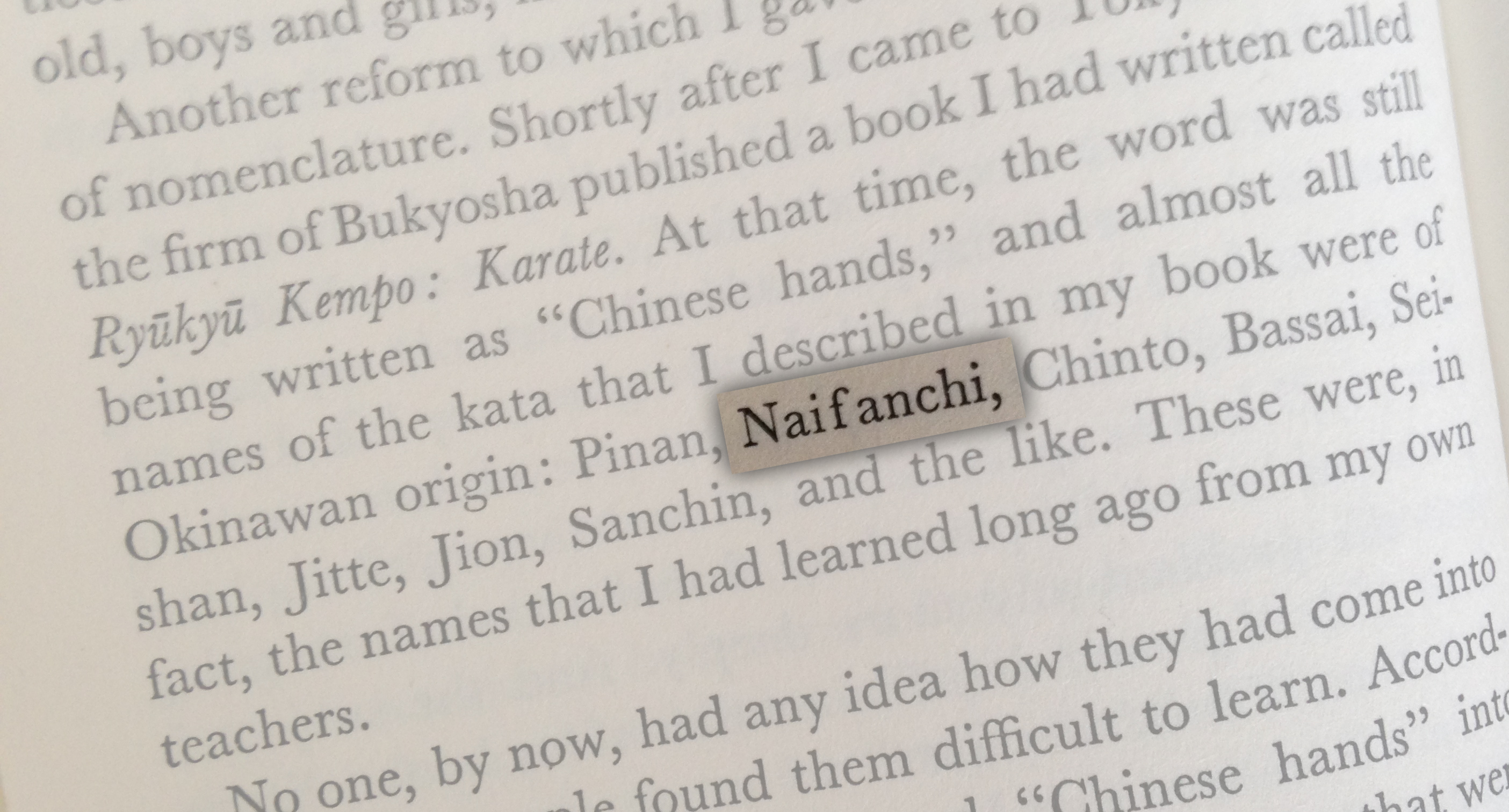 Karate-do my way of life by Gichin Funakoshi

The Naifanchi (Daipochin) kata comes from the famous Okinawan karate-ka, Choki Motobu, who is famous for his actual active testing of bunkai in real fighting situations. This sometimes happened by suspicious means, and many a teacher would watch this kind of conduct with disapproving eyes. It was said that Choki Motobu knew only three kata, the Naifanchi series, Wansu, and Passai Guwa. Motobu for the most part, was victorious in his use of the kata bunkai. In many Shorin-ryu styles, Naifanchi (Heishugata) acts as foundation to further kata (Kaishugata) like Sanchin in the Goju-ryu system. Master Tatsuo Shimabukuro, the founder of Isshin-ryu (blend of Goju-ryu and Shorin-ryu), was quoted as saying that, “Naifanchi is mother to Shorin-ryu and Sanchin is father to Goju-ryu. When these two come together then Isshin-ryu is born.”

The primary stance in this series of kata is kiba dachi, which emphasizes the strengthening of the legs and hips. A distinct characteristic of the kata is the technique where the circular movement of the arms protects the head in a block, while simultaneously setting up the opening for the uraken. The appearance of kata can be seen as simple, but from careful study and practice of the bunkai, it is very rich in techniques, and is seen as an effective fighting system.

Bushi Matsumura created both Naihanchi Shodan and Nidan from a kata called Naifanchi that he got from a Chinese Master named Ason. Some believe either Itosu or Choki Motobu made Naihanchi Sandan. Naihanchi Sandan is not a Matsumura kata, passed down other Shorin lines. Funakoshi called Naihanchi by the name Tekki, meaning "Iron Horse", which refers to the stance used in it. "Iron" refers to its strength and stability. "Horse" refers to the fact that it resembles a man riding a horse. There is more than one possible meaning for the word Naihanchi, and they are both very plausible. The pronunciation of Naihanchi was originally Naifanchi, because that is the way it was pronounced in China. The particle 'Nai' means "inner" or "inside" and probably refers to pointing the toes inward. 'Fan' means a clawed foot of a certain animal. 'Chi' means the soil or foundation. So the original name probably meant something to the effect of being rooted to the ground in correct stance. Chin could mean "battle" as it does in the word Sanchin. The word 'Naihan' could refer to the narrow paths through rice fields that resemble squares. Therefore, it could mean "battle in a rice field."

Naihanchi (a.k.a. Naifuanchi) is typical of in-fighting techniques, including grappling. There are three kata in modern (i.e. post 1900) karate, with the second and third being thought to have been created by Itosu Anko (Iwai, 1992; Kinjo, 1991a; Murakami, 1991). Another popular theory is that originally the three were one kata, but were broken up into three separate parts by Itosu (Aragaki, 2000; Iwai, 1992).

This kata was not originally developed to be used when fighting against a wall, but this does not preclude such interpretations. While the kata itself goes side to side, the applications are more often than not against an attacker who is in front of you, or grabbing at you from the sides or behind. Some say that the side-to-side movement is to build up the necessary balance and physique for quick footwork and body-shifting (Kinjo, 1991b).

History: The kata is a widely used international form, which is performed in many different styles of Karate as well as Kempo and Taekwondo today. Because of the kata's complexity and length it was divided into three sections for student learning and practice. The originator of Nihanchi Sho is unknown but it is known that the three katas were practiced as one single kata by Master Sokon (Bushi) Matsumura around 1825. Naihanchi was however handed down to Matsumura from earlier times. This kata was also the favorite form of Yusutsune Itosu (1830-1915) who was nicknamed "Iron Horse" because of his performance of this kata. Itosu is said to have modified Sho and Ni and developed Naihanchi San. This was confirmed in the writings of Mabuni and Funakoshi.

Kenwa Mabuni, the founder of Shito-Ryu, learned all three from Ankoh Itosu. However, first, while traveling and studying, Mabuni learned a form of Naihanchi from a student of Matsumura's namved Matayoshi. When Mabuni returned and showed the kata to Itosu, his teacher remarked that it was similar to the kata Matsumura had devised after training with a Chinese attache named Channan. It was at this time that Itosu confirmed that he (Itosu) had modified them as well.

Around 1895, Master Choki Motobu popularized the kata by daily performing the three forms as one kata at least five hundred times. The three Naihanchi katas performed as one became known as Motobu’s Kata, and he is said to have stated many times, "There is only one kata necessary to develop and excel in karate, and that is Naihanchi as one." The form was developed as a defense against four to eight opponents, with performer pinned against a wall defending to the right, left or from the front, but never from the rear.

The composer of this kata is unknown, but it has long been treasured by karateman from Shuri and Tomari. Many traditions assert that Soken Matsumura created Naihanchi or based his version on older forms known to him. Most Shorin-ryu styles practice trree distinct short form of Naihanchi. Before Pinan's invention in 1907, Naihanchi kata were the first forms taught to beginner level practitioners.

The most important purpose of Naihanchi lies not in the fighting skills it develops, but in training the lower parts of the body through slow and steady sideward movements. Developing strong legs and hips are indispensable to karate training. Accrding to Grandmaster Nagamine the posture for Naihanchi is similar to the sitting posture for Zen, with strength concentrated in the abdomen. Nagamine recalls that the Naihanchi kata were a favorite of Choki Motabu. Naihanchi kata is useful when there is limited space.

The punching and blocking motions are short because space is very restricted. The short techniques make Naihanchi a very difficult kata to master, and some consideration might be given to thinking of Naihanchi as a more technically advanced level form. Naihanchi, or Tekki in japanese, translated means horse when riding. Some practitioners perform Naihanchi with the knees directed inwards. This is incorrect posture and the practitioner do this because they have not properly developed their legs. When performing each of the Naihanchi kata, once the practitioner drops into the horse stance it is critical to keep their height consistent throughout the entire kata. The practitioner's height should not fluctuate up and down. The only way to build power is not a stance is a strong stance for defense from the front and rear of the practitioner. However, it is extremely strong from the left and right sides of the practitioner. The weight distribution is equally spread between the two legs. if the weight is ever transferred to one leg the practitioner looses all strength in the stance from the sides and is vulnerable to attack from the left and right sides of the body. Therefore, when stepping over to move in the horse stance in a sideways direction, the practitioner must try and shorten the time the weight distribution is over the supporting leg. This is one of the primary skills developed in the three Naihanchi forms.